on a lighter note

Churchill Club Top Ten Tech Trends 2012
Originally uploaded by jurvetson
Via jurvetson on Flickr:
This is the most difficult speaking event, by far, that I take on, and somehow I keep coming back.
Just spank me with that red paddle!

Five panelists are asked to come up with two tech trends that we think are worthy of the top 10 title, and that are, as they instruct:
1) Not obvious today
2) You believe there will be explosive growth in about five years’ time

When you do this for many years, it gets harder and harder. For several years now, I have done this, and have to come up with new ones each year. If it's too obvious, it's boring. If it's too radical, it might not be relevant over the next five years. And it had to be important and new... worthy of a top 10 tech trend.

Trend 1. Radical Globalization of Social Commerce (Kevin Efrusy)
In prior cycles, international segments consisted of 30-40 percent of revenue, begun 3-5 years after the US effort. Going forward, "ROW" can dominate domestic, and players who wait to address it are vulnerable to competitors who go global first.

Trend 2. Zero Marginal Cost Education (Bing Gordon)
In the 1970s, ATMs were considered “dehumanizing” and bank tellers were the gold standard. But tellers got worse, while ATMs improved. Public education seems to be repeating this pattern, and the oligopolists of “big education” don’t seem to have read Innovator’s Dilemma.

Trend 3. Massive Sensors and Data (Reid Hoffman)
Sensors cost trends to zero; there are sensors everywhere and part of everything. In combination, we'll create multiple data collections that power applications and innovations to improve our lives. Genetics, disease, and symptom data for automate tri-corders, precision diagnosis, and personalized medicine. Collaborative filtering of all kinds of discovery– from music to information to professional training.

Trend 6. It's Just the Venture Cycle (Kevin Efrusy)
The fortunes of Silicon Valley rarely mirror the rest of the world because the ebb and flow of creative disruption follows a different pattern and 14-16 year cycle than the macro economy. We appear to be right on schedule...

Trend 7. Gamification of Everything (Bing Gordon)
As Lance Armstrong wrote, “Every second counts.” As digital natives increasingly multi-task, and as the social web creates geometric growth in posts, the battle is for engagement. For the growing population of game-players, reportedly 70% of Americans, games are important systems for creating meaning, and can increase behavior by 25 to 100%.

Trend 9. Moore's Law Accelerates Beyond Silicon (Steve Jurvetson)
When we consider Moore’s Law in the abstract, the dropping cost of computation is not tapering off. Rather it will accelerate further still as we look beyond the silicon era.

you can start here. I argued that from a customer value measure, Moore’s Law itself will accelerate beyond what Intel and Moore himself would predict. This will come from radically new architectures and new ways to compute.

The EV trend must not be obvious because all of my fellow VC panelists disagreed. Here are my notes on what I argued:

First: the importance: the U.S. spends $2B per day (+$4B if you count indirect costs) on oil, mostly for our vehicles. Larger than the entire Internet market

While most everyone agrees that we have to eventually get off oil if you look far enough in the future (think 10,000 years), the question is when and how. Not if.

Why go electric? Even if you want to burn oil, fracked gas, or a biofuel, for some reason, it’s better to do it in a centralized plant because of the heat loss in small engines. A modern Siemens cogen plant is 70% efficient. Our cars are 20%. EVs like Tesla are 88% efficient.

I showed a slide with images of a bunch of gorgeous cars coming out in the next 18 months. All of these cars have a lower total cost of ownership than a Taurus.

Convenience: almost no maintenance for an EV. Mainly tires.

FedEx: so proud of their new electric fleet, they are doing test drives over at the Rosewood.

Air quality? China has to go electric.
Surprise! There are 200M EVs on road today in China, built by 1,300 different Chinese manufacturers.
Mostly electric scooters. Uptake started with SARS (people feared public transportation), and then they discovered the the total cost of ownership is less than the public bus fare (even with VRLA battery replacements).

Here's the growth curve I pulled together with Weinert from Chevron and now Bosch China: 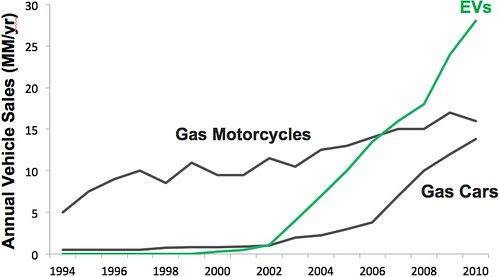 If China does not go electric, and instead buys more gas-burning cars by 2050 than exist on the road today (as is forecast), the planet is screwed.

In the future, when all vehicles are electric, we will look back to the current era and marvel that there were a billion oil-burners driving around the planet wasting 80% of their energy as heat and applying only 0.3% of that energy to moving the passenger.

The Tech Trend prediction is not that we will change a billion vehicles in 5 years, by no means, but that hopefully we can change a billion minds. We used to take cigarette smoking as a given. It should be much easier to give up our addiction to oil and our smoking cars, because the new EVs will be so much more affordable, convenient and fun.

I hate to be a party pooper, but I think the major trend in the next few years is going to be the increasing pauperization of the middle class in developed countries leading to a fracture in elemental social cohesion, with the cost of food turning much of the developing world into riot and terrorism prone failed or semi-failed states, which would most probably lead to an extremely toxic political environment. Also the increasing resistance of bacteria to antibiotics, www.bloomberg.com/news/2012-05-07/drug-defyin g-germs-from... may make the coming decades look like 14th century Europe
Posted by fCh No comments: