Where do our moral judgments come from? 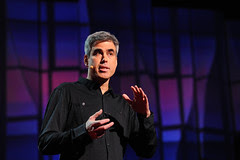 
According to moral foundations theory, morality begins as a set of evolution-derived intuitions, which each child then learns to apply within his or her culture. Haidt suggests six dimensions or categories or foundations, into which nearly all our intuitions fall:

1) help those in need and minimize suffering everywhere (the care/harm foundation);
2) reward people according to what they contribute (fairness/cheating);
3) advance the fortunes of your group (loyalty/betrayal);
4) defer to legitimate superiors and protect subordinates (authority/subversion);
5) resist domination by illegitimate authority (liberty/oppression);
6) respect your group’s totems and taboos (sanctity/degradation).
Posted by fCh 1 comment: