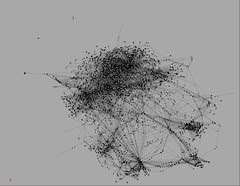 Map of my Facebook "universe"
Originally uploaded by Porter Novelli Global
Via Flickr:
"This was one of the earliest network maps I worked on in Q1 2008 -- rather solipsistically, it's a map of my own Facebook friends (with my own node removed, so that it pulls apart a little.) It attempted to map two degrees of separation; what you see here is my friends and their friends. I think I removed the pendants." [...]

Would you sign a blanc check, not knowing who or when is going to cash it? In effect, that's what people are doing when handing over all their stuff to Facebook.


I guess, the answer to the above would be YES, in case you discounted your future indefinitely to, well, 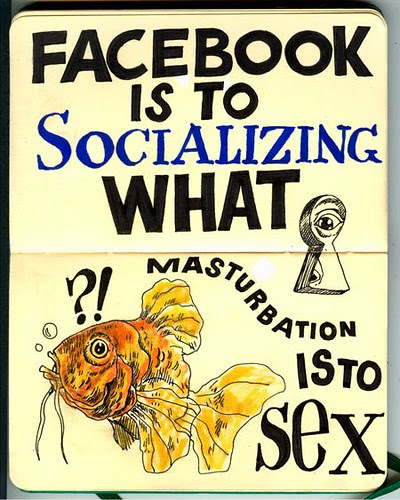 IMAGINE a world in which we are assigned a number that indicates how influential we are. This number would help determine whether you receive a job, a hotel-room upgrade or free samples at the supermarket. If your influence score is low, you don’t get the promotion, the suite or the complimentary cookies.

This is not science fiction. It’s happening to millions of social network users.

If you have a Facebook, Twitter or LinkedIn account, you are already being judged — or will be soon. Companies with names like Klout, PeerIndex and Twitter Grader are in the process of scoring millions, eventually billions, of people on their level of influence — or in the lingo, rating “influencers.” Yet the companies are not simply looking at the number of followers or friends you’ve amassed. Rather, they are beginning to measure influence in more nuanced ways, and posting their judgments — in the form of a score — online.

To some, it’s an inspiring tool — one that’s encouraging the democratization of influence. No longer must you be a celebrity, a politician or a media personality to be considered influential. Social scoring can also help build a personal brand. To critics, social scoring is a brave new technoworld, where your rating could help determine how well you are treated by everyone with whom you interact.

“Now you are being assigned a number in a very public way, whether you want it or not,” said Mark W. Schaefer, an adjunct professor of marketing at Rutgers University and the executive director of Schaefer Marketing Solutions. “It’s going to be publicly accessible to the people you date, the people you work for. It’s fast becoming mainstream.”

Influence scores typically range from 1 to 100. On Klout, the dominant player in this space, the average score is in the high teens. A score in the 40s suggests a strong, but niche, following. A 100, on the other hand, means you’re Justin Bieber. On PeerIndex, the median score is 19. A perfect 100, the company says, is “god-like.”

Companies are still refining their methodologies — sifting through data and evaluating other networking sites.

This month, Klout announced that it was beginning to incorporate LinkedIn profiles.

As Azeem Azhar, chief executive of PeerIndex, put it, “We’re at the start of this journey and we expect the journey to take us into much more nuance and granularity.”

Marketers are signing on. More than 2,500 companies are using Klout’s data. Last week, Klout revealed that Audi would begin offering promotions to Facebook users based on their Klout score. Last year, Virgin America used the company to offer highly rated influencers in Toronto free round-trip flights to San Francisco or Los Angeles. In Las Vegas, the Palms Hotel and Casino is using Klout data to give highly rated guests an upgrade or tickets to Cirque du Soleil.

How does one become an influencer?

After analyzing 22 million tweets last year, researchers at Hewlett-Packard found that it’s not enough to attract Twitter followers — you must inspire those followers to take action. That could mean persuading them to try Bikram yoga, donate to the Sierra Club or share a recipe for apple pie. In other words, influence is about engagement and motivation, not just racking up legions of followers.

Industry professionals say it’s also important to focus your digital presence on one or two areas of interest. Don’t be a generalist. Most importantly: be passionate, knowledgeable and trustworthy.

Still, scoring is subjective and, for now, imperfect: most analytics companies rely heavily on a user’s Twitter and Facebook profiles, leaving out other online activities, like blogging or posting YouTube videos. As for influence in the offline world — it doesn’t count.

Mr. Azhar, of PeerIndex, calls this “the Clay Shirky problem,” referring to the writer and theorist who doesn’t use Twitter much. “He’s obviously massively influential,” Mr. Azhar said, “and right now he has a terrible PeerIndex.”

Jeremiah Owyang, an analyst with Altimeter Group, a digital-strategy consulting firm, wrote a few months ago that using a single metric to evaluate influence is dangerous. He noted that Klout “lacks sentiment analysis” — so a user who generates a lot of digital chatter might receive a high score even though what’s being said about the user is negative. Also, a single metric can be misleading: someone with little Twitter experience can snag a high score if they happen to post a video that goes viral.

More broadly, Mr. Schaefer of Schaefer Marketing and others are concerned that we are moving closer to creating “social media caste systems,” where people with high scores get preferential treatment by retailers, prospective employers, even prospective dates.

No wonder some people are trying to game their scores. Attaining true influence requires time and commitment. And while your flesh-and-blood self deserves a break every now and then, your digital self will pay the price.

“I went on vacation for two weeks,” said Mr. Schaefer, “and my Klout score went down.”

Facebook is adapting to the growing social media world. Facebook is and always will be "COOL." That is the whole idea. Almost everyone wants their lives to be published. Facebook has closed the gaps between cities, states and continents... Being a college student I can see this, maybe the older generations are not susceptible to change... For FB to survive it needs to adapt, and in a cyber centered society, people need to be able to adapt as well... It only takes a few minuted to get used to changes. Stop being stubborn and move forward and learn the changes, they give you a tutorial for heaven's sake! Zuckerberg is doing an amazing job with FB and he is keeping up with the social media trends. It's time for the older generations to adapt, learn to adapt, or get lost.

To Alison - I was on the Internet before you or Zuckerberg were born, and I can't count the new, cool, must-have things that have come and gone, or the companies that thought they'd rule the world, and didn't. Adapting to change, yes, I know how to do that. Does Zuckerberg? We'll see. Time evens things out.

To Allison, who writes:
"Almost everyone wants their lives to be published"

Well, no, they don't. In fact, a lot of us (of all ages) go out of our way to NOT have our lives end up online for the world to observe, comment, etc.

A lot of people want attention and some of them get it via facebook and twitter (or think they're getting it). And that's somewhat sad because if you have to go online (as opposed to developing relationships with flesh-and-blood humans in the real world) to get what you need in life then you really don't have a "real" life.

Social media as a way to keep up with a select (emphasis on "select" not mass numbers) of people in a very private fashion is definitely something many can use. But there are so many privacy issues now and so much junk and irrelevant stuff on facebook that it takes too much work to communicate. And who of us has time to go thru all the nonsense that too many people post.

There are people I'm interested in and what they are doing. Alas, they are the very folks who have no time to tweet, go on facebook or update Linked In. They're too busy living their lives and actually communicating and interacting with real people. They don't have time to waste online!

It's not that social media doesn't have a place. It's just that it's about the time spent versus the reward. Keeping up is just too time-consuming and no real information is shared, just junk, for the most part. It's like a press conference. Nobody says the really good stuff "on the record."